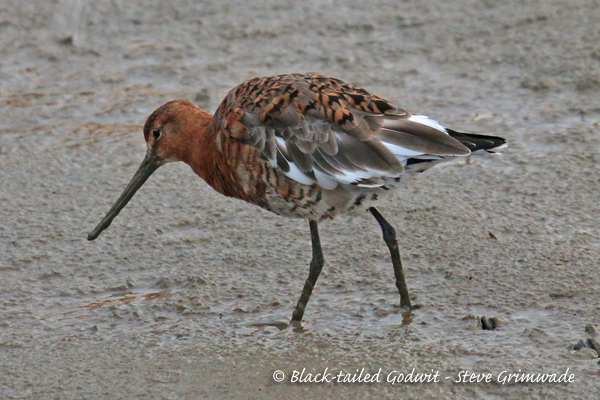 A perfect spring morning for a cruise down the Blackwater estuary aboard Topsail Charters barge Kitty(1895). After a warm welcome from the crew we set off down river accompanied by wheeling flocks of BLACK-TAILED GODWITS heading off to roost, and groups of TEAL and BRENT GEESE along the muddy margins. We had already seen GREENSHANK and LITTLE EGRET before we left and as we gently cruised past Heybridge and Northey Island we saw more waders,(DUNLIN, AVOCETS and REDSHANK), and wildfowl, (WIGEON and PINTAIL), as the incoming tide pushed them off the marshes.

Around Osea Island the mirror calm conditions were good for birding, not so good for sailing, but as we drifted two seals gave distant views, as did a SLAVONIAN GREBE with GREAT CRESTED GREBES, and a flock of LONG-TAILED DUCKS, a rare sight in Essex waters. Returning back up river a PEREGRINE FALCON flew over, and we saw more waders and a group of LITTLE GREBES, before tucking into our hearty soup and rolls for lunch.

The walk along the promenade gave us good views of mostly the same species including some godwits moulting into summer plumage before their migration to Iceland, and a flock of GOLDEN PLOVER dropped down onto the mud.

Highlights:
BLACK-TAILED GODWITS: 500+ including some in summer plumage

LONG-TAILED DUCK: 19 seen in a tight flock all diving together, it has been a good winter for this species, normally only one or two are seen each year.