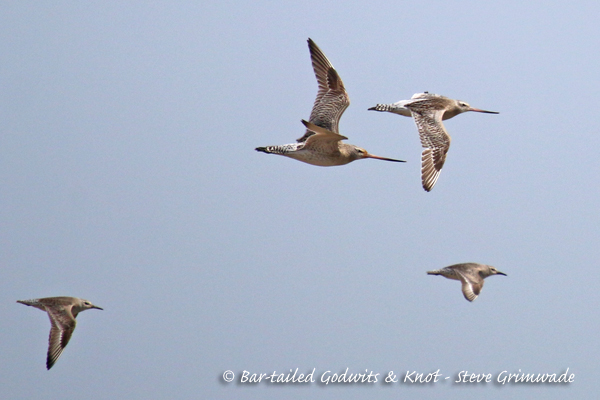 Another beautiful day on Sailing Barge Kitty out on the River Colne started with a fly past of four Apache, two Chinooks and a Puma helicopter! Once out on the main section of river we watched plenty of DARK-BELLIED BRENT GEESE feeding on the shoreline along with CURLEW, BLACK & BAR-TAILED GODWITS.

After a very enjoyable lunch of Spicy Lentil Soup with crusty bread followed by Chocolate Brownie with forest fruits and cream we continued up past Fingringhoe Wick nature reserve where both COMMON BUZZARD and MARSH HARRIERS were circling. KNOT, DUNLIN, OYSTERCATCHERS and GREY PLOVER were still numerous and showed no signs of heading north to their Arctic breeding grounds.

After reaching Rowhedge, we turned round and set sail back southwards. The birding was quieter than the previous day but everybody enjoyed the chance to be under sail with no noise except the birds!

As we reached Fingringhoe again we watched a pair of GOOSANDER in flight briefly and on the Geedon Saltings over 300 CURLEW were roosting.

Thanks once again to the crew for looking after everybody so well and for the customers who made it such an enjoyable trip.