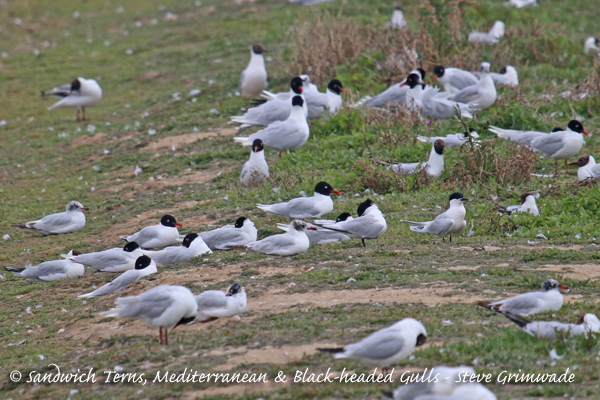 We started the day later than usual and kicked off in the Minsmere tea room for a coffee and bacon butty with MEDITERRANEAN GULLS meaowing overhead. A Marsh Warbler had been found earlier in the morning and we heard this fantastic songster as it imitated many species including Corn Bunting, Yellow Wagtail, European Bee-eater and Barn Swallow!

BEARDED TITS, REED WARBLER and SEDGE WARBLERS showed across North Wall and from East Hide were really good numbers of MEDITERRANEAN GULLS plus a single adult YELLOW-LEGGED GULL. COMMON & SANDWICH TERNS flew to and fro from the scrape and could be seen carrying fish for their chicks.

Our walk around the scrape revealed more MEDITERRANEAN GULLS including 43 on a small island!

Whilst having lunch in the shade, three EUROPEAN TURTLE DOVES flew through and then we headed round the other half of the reserve where VARIABLE DAMSELFLY and many NORFOLK HAWKERS were seen.

The southerly breeze was welcome in the hides after being so hot during the day. Other notable species included WATER VOLE, EURASIAN HOBBY, WESTERN MARSH HARRIERS, EURASIAN SPARROWHAWK and a delightful STONE CURLEW family with three well grown chicks.

It was then off for fish and chips before visiting heathland where up to three pairs of WOODLARK showed well and a pair of DARTFORD WARBLERS were alongside EUROPEAN STONECHATS.

As the sun fell, we heard our first EUROPEAN NIGHTJAR and one was seen almost immediately in flight before vanishing. We had to wait a while before we saw several more but the light had virtually gone. All in all we had a very enjoyable day in coastal Suffolk.