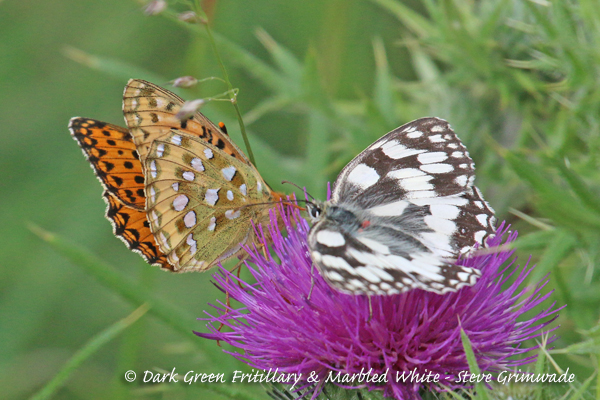 The Chilterns were the destination for our last day trip of the spring and they produced some excellent sightings.

We started the day on a chalk ridge overlooking the area where lots of MARBLED WHITES were on the wing with the occasional flash of orange from DARK-GREEN FRITILLARIES. The area was awash with wildflowers and one of our target species, the FROG ORCHID was seen easily on the northern slopes.

RED KITES, COMMON BUZZARDS, NORTHERN RAVEN and EURASIAN HOBBY drifted over the area and in the scrub were EURASIAN NUTHATCH & MARSH TIT.

In the dense Beech woodlands we found several specimens of BROAD-LEAVED & NARROW-LIPPED HELLEBORINE although they were a week or so off flowering. We were lucky to see YELLOW BIRD’S-NEST, a plant that does not contain chlorophyll but gets its food through parasitism upon fungi rather than photosynthesis.

With some time spare, we concluded the day at another reserve high on the Chilterns where DARK-GREEN FRITILLARIES, MARBLED WHITES and RED KITES provided superb views.