WHERE THE PAGER TAKES US – AUTUMN BIRDING
Saturday 30th September 2017 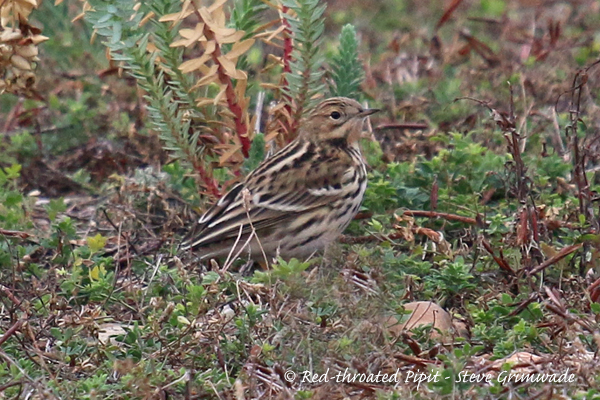 With autumn migration in full flow, we headed the short distance to Landguard Point, Suffolk where we had superb views of a RED-THROATED PIPIT as it fed alongside groups of MEADOW PIPITS allowing some great ID comparisons between the two species. Other species noted included a female COMMON REDSTART, NORTHERN WHEATEAR, SANDWICH TERNS, MEDITERRANEAN GULLS and a couple of flyover TREE PIPITS.

After a spot of breakfast, we moved northwards to Bawdsey where a very elusive RADDE'S WARBLER had been seen earlier in the morning. After spending some time, most of the group only managed glimpses of this bird as it flitted amongst the scrub. Up to three CLOUDED YELLOW BUTTERFLIES were seen and nearby good numbers of COMMON BUZZARDS, whilst we had lunch in the sunshine.

It was then back southwards to Holland Haven where we caught up with a RED-BREASTED FLYCATCHER as it flitted around a clump of Hawthorns, we enjoyed good views of this Essex rarity, which was a great end to the day!