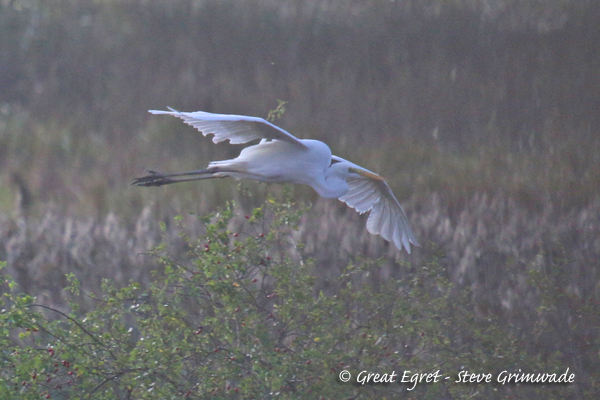 With Storm Brian hitting the west coast of the UK and the east coast getting strong winds, we opted for a visit to North Norfolk hoping to find shelter and more importantly, some good birds!

We stopped off on the way for a spot of breakfast that was well received and a while later, pulled up at Holkham where small parties of EGYPTIAN GEESE and larger numbers of PINK-FOOTED GEESE fed on the freshmarsh. A GREAT EGRET was seen distantly in flight and landed out of view so we headed that way along the track.

Bushes that were sheltered held good numbers of GOLDCREST and in the mixed flocks of BLUE, GREAT, COAL and LONG-TAILED TITS we found a EURASIAN TREECREEPER.

The wind was blowing strongly through the flaps of the Washington Hide making viewing quite difficult although we did find good numbers of WESTERN MARSH HARRIERS, COMMON BUZZARDS and three distant RED KITES.

The best birds were two GREAT EGRETS that put in a fine flypast in front of the hide before heading away.

A walk to the sea yielded a summer-plumaged RED-THROATED DIVER, COMMON SCOTER, NORTHERN GANNET and a small party of RED-BREASTED MREGANSERS.

With our stomachs rumbling, we headed back to the van where lunch was very welcome indeed!

Afterwards we drove the short distance to Titchwell RSPB reserve and headed straight to the Fen trail where with perseverance we heard and some of the group glimpsed a YELLOW-BROWED WARBLER in the tangle of scrub. Other species seen here included EURASIAN BULLFINCH, COMMON CHIFFCHAFF and several COAL TITS amongst good numbers of LONG-TAILED TITS.

A EURASIAN KINGFISHER was seen briefly as it flew up from a reedy pool beside the path but with time and light rapidly decreasing, we made the decision to start the journey back to Essex after a good day out in the field.