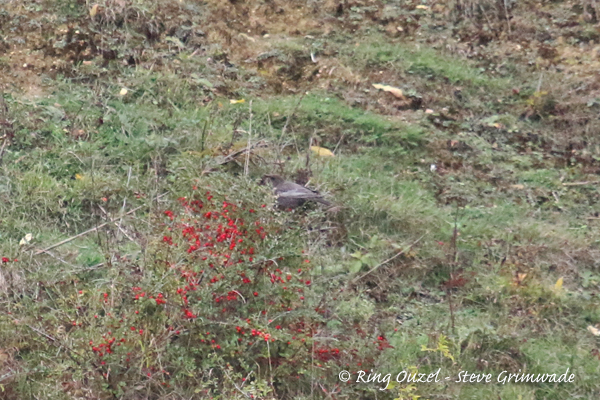 With the weather forecast improving, we headed into Suffolk and after a stop at the Golden Arches, drove the short distance to Kessingland and to Heathlands Holiday Park.

A small copse of trees was our first destination where the sheltered side produced a few COMMON CHIFFCHAFFS plus GOLDCRESTS and a mixed tit flock. A EURASIAN BULLFINCH flew in off the sea and disappeared into the scrub, but a better surprise was a HAWFINCH that flew over, seconds after telling everyone to look out for them as there had been many in the UK this autumn!

The sheltered clifftop held a very late SAND MARTIN along with COMMON HOUSE MARTINS and BARN SWALLOWS as they hawked insects. Our next port of call was the beach, but we were waylaid with three RING OUZELS that were feeding with COMMON BLACKBIRDS on the undercliff. They were elusive at times, but with patience we all had good views!

Reaching the beach we searched high and lo for our target and eventually we located a couple of EURASIAN SKYLARKS and there amongst them was a superb LAPLAND BUNTING!

Disturbance from walkers, dogs and children was high and eventually they flew off and a second LAPLAND BUNTING appeared. The walk back to the copse gave more views of the RING OUZELS plus SONG THRUSH, REDWING and a surprising number of GREAT TITS.

Back at the copse were a few LESSER REDPOLL plus flyover EURASIAN SISKINS before rain started and eventually sent us back to the van for shelter.

Lunch was enjoyed overlooking Hamilton Dock in Lowestoft where a pair of PEREGRINE FALCONS sheltered on the silos opposite and with brighter conditions to the south, we left the rain and drove to Minsmere RSPB reserve for the remainder of the day.

After checking in, we wandered round to the beach to look for a reported Snow Bunting but with no luck so we visited East Hide to check out the gull roost.

A GREAT EGRET appeared from behind the hide and flew north, but our attentions were firmly on the gulls and with careful scanning, we picked up five adult YELLOW-LEGGED GULLS amongst the many EUROPEAN HERRING and LESSER BLACK-BACKED GULLS.

A COMMON KINGFISHER flew past the hide and we scoped the bird as it perched on a post. With time getting on we left the hide, only to be called back by Warden Adam Rowlands and birder and journalist John Grant to say that a Caspian Gull had just dropped in!

It was good to have a gull masterclass from these top birders and we all enjoyed views of the adult CASPIAN GULL alongside HERRING, LESSER BLACK-BACKED and YELLOW-LEGGED GULLS where good comparison could be made.

On the walk back five WHOOPER SWANS were spotted flying in from the north and they carried straight on towards Sizewell. After coffee and cake at the van, we headed home after what had been a cracking day of birding on the Suffolk coast.