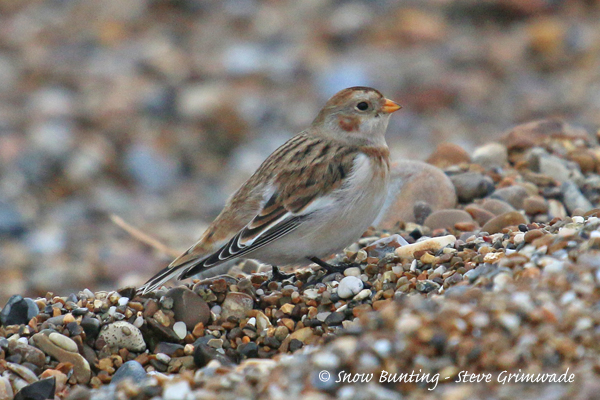 With bird news relatively quiet, we started the day off in Lowestoft where male and female PEREGRINE FALCONS surveyed the area from their perches above Lake Lothing. After a stop for coffee and bacon rolls we drove to Ness Point, the most easterly point in Britain to look for migrants or seabirds passing the coast.

Good numbers of RUDDY TURNSTONE were on the rocks plus a flyover EURASIAN ROCK PIPIT whilst on the sea were around 150 NORTHERN GANNETS plus lots of GREAT CORMORANTS feeding some way offshore.

A small party of COMMON SCOTER flew past and we noted REDWING and COMMON STARLINGS coming in off the sea. An adult MEDITERRANEAN GULL was close inshore and three BAR-TAILED GODWITS moved northwards.

After a while we decided to head south and a stop for toilets produced a BLACK-HEADED GULL that was rung in Norway. Our next site was Dunwich beach and after parking we strolled northwards along the shingle ridge, where a look out to sea yielded three GREAT SKUA plus good numbers of NORTHERN GANNETS.

With careful scanning of the area we eventually located three SNOW BUNTINGS that moved onto a shingle bank where we all enjoyed good scope views of these delightful winter visitors.

A GREAT EGRET was seen in flight over the marsh, then finding a small finch flock we eventually picked out at least two TWITE amongst them as they fed on the beach and adjacent saltmarsh. They were unfortunately flushed several times by dog walkers which made viewing tricky at times.

We headed for a late lunch and then dropped down into Minsmere RSPB reserve for the remainder of the day.

The feeders at the centre held MARSH, COAL, BLUE and GREAT TITS plus the star of the show, a superb BRAMBLING that showed well before flying off into the bushes.

EURASIAN SISKINS and LESSER REDPOLLS were heard but remained unseen in the leaf-laden trees and as we reached the eastern end of the north wall we again took the opportunity to sea-watch. Another six or seven GREAT SKUA were seen harassing the gulls and NORTHERN GANNETS, there was so much movement there could well have been more.

From the east hide we checked out the gull roost and found two adult YELLOW-LEGGED amongst the many HERRING, LESSER and GREAT BLACK-BACKED GULLS. Two COMMON KINGFISHERS flew in front of us and one perched on the edge of the reed-bed for all to see.

With time running out and the light starting to go, we retraced our steps back to the carpark for a slice of cake, before making our way home after a good day on the east coast.