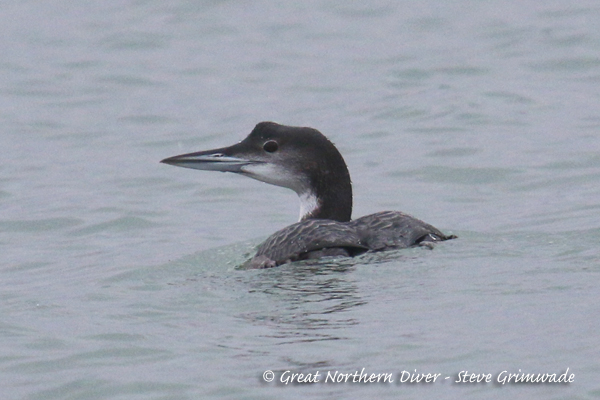 The weather was grey but very calm for our boat trip which began well with a PALE-BELLIED BRENT GOOSE feeding on the water’s edge even before we left the carpark! The second bird we laid eyes on was the returning adult BLACK BRANT, which fed with a group of DARK-BELLIED BRENT GEESE.

We headed to the east and the esplanade area which produced a fine GREAT NORTHERN DIVER and a few GREAT CRESTED GREBES. From here we explored the creeks surrounding the RSPB’s Old Hall Marshes Reserve and came across an adult EUROPEAN SHAG roosting, plus good numbers of RED-BREASTED MERGANSERS and COMMON GOLDENEYE along with two PEREGRINE FALCONS and six WESTERN MARSH HARRIERS. A lone RED-THROATED DIVER flew out of the river and past Bradwell Power Station giving good flight views.

With the tide rising, we headed into deeper water where several small flocks of COMMON SCOTER offered the group good views. We then picked up our second, third, fourth and fifth GREAT NORTHERN DIVERS of the trip, some full winter adults and the others, scaly first-winter birds.

A COMMON GUILLEMOT bobbed around, once again allowing close approach and more GREAT CRESTED GREBES, COMMON GOLDENEYE and RED-BREASTED MERGANSERS showed well. Reaching as far as Osea Island saw us unbelievably find three more GREAT NORTHERN DIVERS which achieved our highest ever count of this species in the river! The final two birds showing really well before being disturbed by a ‘muppet’ in a speedboat.

Taking a slow trip back along the northern shore of the Blackwater allowed us to find a single LONG-TAILED DUCK with a small group of COMMON SCOTER and further east we picked up three VELVET SCOTERS flying past us which rounded off another superb trip!