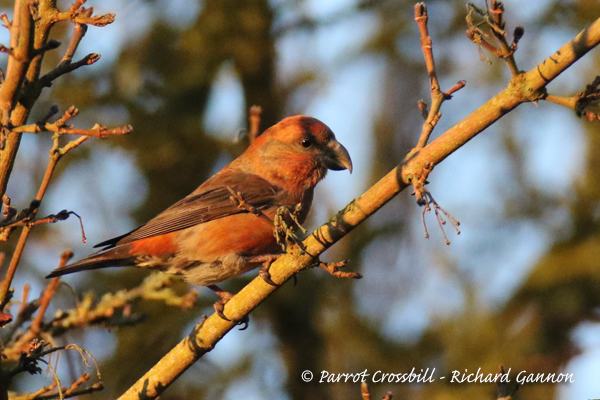 Our last day trip of 2017 was to the wonderful woodlands of The Brecks which once again, did not fail to deliver the birding goods. The weather was decidedly cold as we drove north and the roads were quite icy as we arrived at Santon Downham.

One of the gardens held good numbers of birds including EUROPEAN NUTHATCH, COAL TIT, MARSH TIT and a single BRAMBLING. We wandered up the road and came across a large number of birders and photographers gathered round a couple of frozen puddles, in the hope that a flock of Parrot Crossbills that had been present in the area for the last couple of weeks would come in and drink.

We gave it some time before the cold set in, then had a walk around Santon Warren where we found species such as EURASIAN TREECREEPER, MISTLE THRUSH and EUROPEAN NUTHATCH amongst others.

Our walk took us along the river bank where a female COMMON KINGFISHER showed well and a couple of the group found a WATER RAIL. Four MANDARIN DUCKS flew over giving good views as they headed south.

As we got close to the road we could see the birders with their scopes trained on the nearby trees, but unfortunately by the time we got there, the Parrot Crossbills had flown off! Heading up to the puddles there was still no sign, but as we headed back to the van we found at least four PARROT CROSSBILLS perched in distant trees and they stayed a while before they flew off northwards.

With lunchtime approaching, we moved to the level crossing in the hope they might come in but there was no further sign.

After a warm up, we drove to Lynford Arboretum and a slow walk was taken down to the paddock where we soon picked up a single HAWFINCH perched on a pine and over the next twenty minutes or so we found three more of these chunky finches.

As the light started to fade we began the walk back. A female EURASIAN SPARROWHAWK flew over and a real surprise was a PEREGRINE FALCON zipping over us at high speed. In the carpark we had brief views of a FIRECREST high in a pine tree.

It was then time for mince pies, stollen and fruit cake before our journey back home.

Many thanks to Richard Gannon for the pic of the Parrot Crossbill.