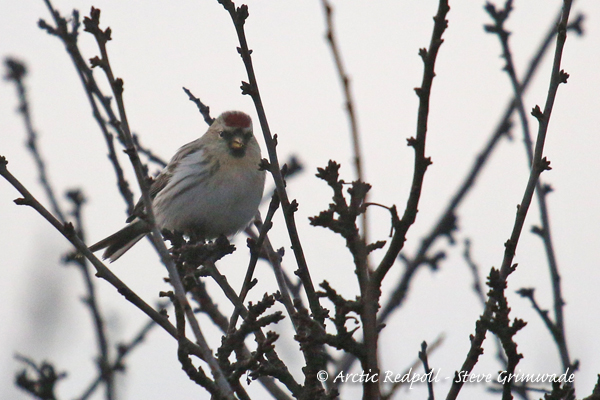 Our day started at Hazelwood Marshes on the western outskirts of Aldeburgh where with a bit of patience, the group had good views of an ARCTIC REDPOLL in amongst a flock of LESSER REDPOLLS with a couple of MEALY REDPOLLS thrown in for good measure. The Arctic Redpoll is a rare visitor from Scandinavia and was often the closest bird on view, which allowed comparison of the three species at close range.

We moved on to Slaughden but apart from a few EURASIAN ROCK PIPITS and a steady stream of RED-THROATED DIVERS moving northwards offshore it was rather quiet. A few minutes later we arrived at North Warren RSPB reserve where up to 55 GREATER WHITE-FRONTED GEESE were on the grazing marsh along with 177 BARNACLE GEESE.

A search was made for a flock of reported Snow Buntings but with no joy, although on receiving a report of some back at Slaughden, we made haste only to find no sign again!

As we headed back past North Warren RSPB reserve we spotted the SNOW BUNTINGS flying along the ridge. We quickly headed over to the spot only for them to vanish, but luckily they turned up again and showed well before heading off northwards.

After a spot of lunch, we moved to Westleton where nine TUNDRA SWANS including three juveniles fed in a field. We decided to have a quick look offshore from Dunwich Beach but apart from around 60 COMMON SCOTER, it was rather difficult to find anything in the choppy conditions.

We rounded off the day in Lowestoft where a search for Purple Sandpipers drew a blank but at nearby Lake Lothing we watched a male and female PEREGRINE FALCON perch up on the grain silo. On the lake itself were both GREAT NORTHERN DIVER and EUROPEAN SHAG which concluded a really good day in the field and kicked off our year in style!