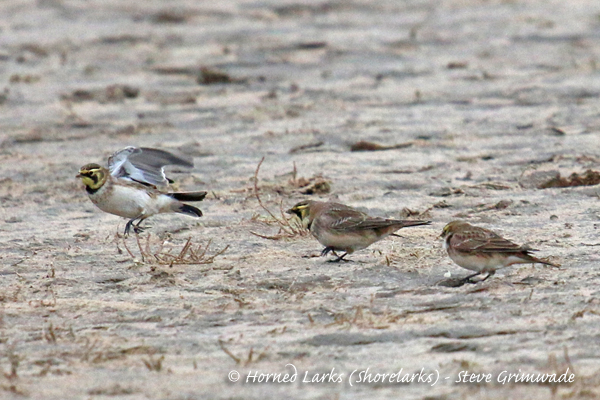 The British weather tried its best to defeat us once again but despite rain and gale force winds battering the coast, we had a very enjoyable day in Norfolk.

We started at Holkham with great views of nine HORNED LARKS feeding close-by in the dunes and followed this by spending time overlooking the grazing marshes.

A fine TUNDRA BEAN GOOSE was with the PINK-FOOTED GEESE and a single GREAT EGRET stood in a nearby flooded field. RED KITES, WESTERN MARSH HARRIERS and COMMON BUZZARDS enjoyed the blowy conditions before we headed over to Titchwell RSPB reserve for the afternoon.

By now the weather had taken a turn for the worst but despite this we found a stunning male BRAMBLING on the feeders before we walked out to the sea.

Getting some shelter behind the dunes enabled us to scan without our scopes shaking and here we watched around 70+ LITTLE GULLS flying west plus nine LONG-TAILED DUCKS, COMMON SCOTER, RED-BREASTED MERGANSERS, RED-THROATED DIVERS, COMMON GUILLEMOTS and a good selection of waders on the beach.

Eight WESTERN MARSH HARRIERS quartered the reedbed and a WATER RAIL showed in the ditch close to the visitor centre rounding off a cracking day!