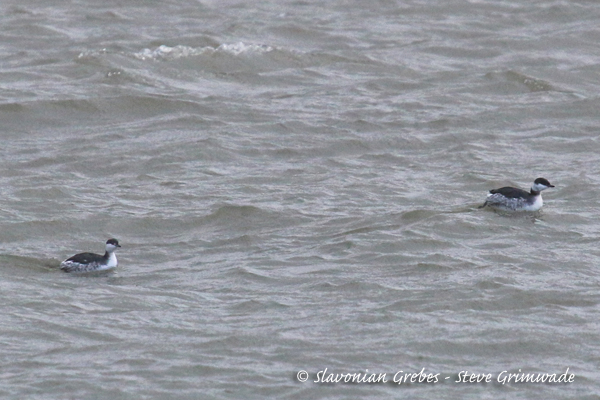 Eight intrepid birders spent the day circumnavigating this excellent nature reserve starting off with flocks of flying RED KNOT, AVOCET, GREY PLOVER and COMMON REDSHANK that moved from their roosting islands in the Tollesbury Channel. A ROCK PIPIT foraged on the seawall whilst a brief squall came through.

As the tide came in, we found small numbers of both COMMON GOLDENEYE and RED-BREASTED MERGANSER on the rather choppy waters. Whilst watching our first of five WESTERN MARSH HARRIERS, a female MERLIN was seen perched on a fencepost, giving reasonable views through the scope much to everyone’s delight.

A fine SLAVONIAN GREBE showed well and was joined by a second bird and then a BLACK-NECKED GREBE flew past landing on the water nearby.

We managed to get incredibly close to two GREAT NORTHERN DIVERS which didn’t worry about us at all!

Two female/immature COMMON SCOTER were out on the main river, along with another GREAT NORTHERN DIVER and SLAVONIAN GREBE.

After lunch in the sunshine, we carried on round the reserve noting three EUROPEAN STONECHATS and a WESTERN BARN OWL that perched on fence-posts.

Along the Salcott Channel we struck gold when a GLOSSY IBIS flew over the saltings on the north shore and landed. We had good views as it fed in small pools and although not too close, it was in great light.

In the fields to the south sat a male PEREGRINE FALCON eyeing up a gaggle of CANADA GEESE.

The sky to the north looked decidedly dodgy with vast black clouds approaching, so we made quick progress along the seawall but unfortunately ten minutes from the carpark, we were caught in a very heavy sleet shower where the grass went white and the temperature dropped significantly.

We reached the vehicles just as it stopped and ten minutes later, the sun came out – typical!

Despite the glitch in the weather, we had a superb day with lots of quality birds!