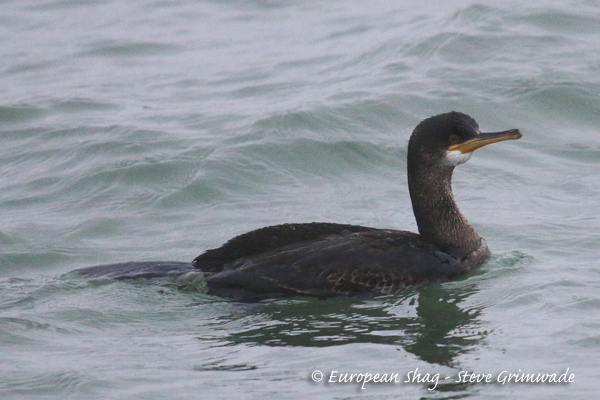 Everyone met bright and early on the Hythe Quay ready to board Thames Barge ‘Thistle’ for our day sail on the River Blackwater.

As we set off quite a few waders were present on the foreshore including PIED AVOCET, BLACK-TAILED GODWITS, DUNLIN, COMMON REDSHANK, GREY PLOVER and EURASIAN OYSTERCATCHERS whilst breakfast with tea and coffee were served downstairs.

Reaching Heybridge Basin, a female COMMON GOLDENEYE flew past and out on Northey Island were EURASIAN CURLEW, COMMON SHELDUCK and both EURASIAN TEAL and EUROPEAN WIGEON.

By now it had started to rain so we took cover in the warm conditions below deck. A few hardy folk stayed on deck and close to Osea Island a first-winter EUROPEAN SHAG gave superb views close to the barge before flying west.

RED-BREASTED MERGANSERS and GREAT CRESTED GREBES were rather numerous, the latter in their beautiful breeding plumage.

It wasn’t long before more tea/coffee and biscuits were proof that we were not going to starve during the day!

The weather was not good but the forecast was for it to clear by noon so we had our fingers crossed that it would be right.

Everyone was very comfortable below deck and it didn’t take long before the bar was serving a few drinks of an alcoholic nature to keep the cold at bay.

At lunchtime the rain cleared and it was good to be back on deck, although birds were rather quiet in the deeper part of the river. Lunch was superb with Chicken breast cooked with Rosemary, onion and tomato followed by a scrumptious Chocolate Brownie, Forest Fruits and cream.

We had hoped to head into the River Colne, but due to the strengthening wind, the skipper decided to moor off Pewet Island close to Bradwell Power Station where the waters were really calm.

A SLAVONIAN GREBE was spotted on the north shore of the Blackwater and a female WESTERN MARSH HARRIER glided over the seawall close to the Power Station.

Lighter winds ensured we could set sail and it was blissful as we quietly drifted towards Mersea Island. We enjoyed much closer views of the SLAVONIAN GREBE, plus we had the added bonus of locating three GREAT NORTHERN DIVERS just offshore from West Mersea.

By now the sun had come out which made perfect conditions for looking at…. Gulls! Over the next thirty minutes or so we watched at least nine MEDITERRANEAN GULLS on the sea including five summer-plumaged birds, two winter adults, a second winter and a first winter. A couple of these flew past the barge and their distinctive ‘cat-like’ calls could be heard. It was good to be on deck whilst we tucked into tea/coffee and lovely fruit cake.

It was then time to head back towards Maldon and as we passed the moored Radio Caroline boat ‘Ross Revenge’ the sky was looking menacing creating a dramatic effect.

A couple of heavy showers sent us all below decks again which luckily coincided with our supper of soup and fresh bread which was well received.

Whilst waiting for the tide we spent time off the eastern tip of Northey Island, where up to 700 BLACK-TAILED GODWITS fed along with thousands of BLACK-HEADED GULLS.

Making our way back into Maldon was beautiful with the twinkling lights glowing in the dark. Unfortunately the tide was too low to be able to moor and we had a bit of a wait, but despite this the day had been very enjoyable. We’d had some good birds, good food and a memorable time out on the River Blackwater with a lovely group of people.

Special thanks to the crew and staff at Topsail Charters for making our time so enjoyable!