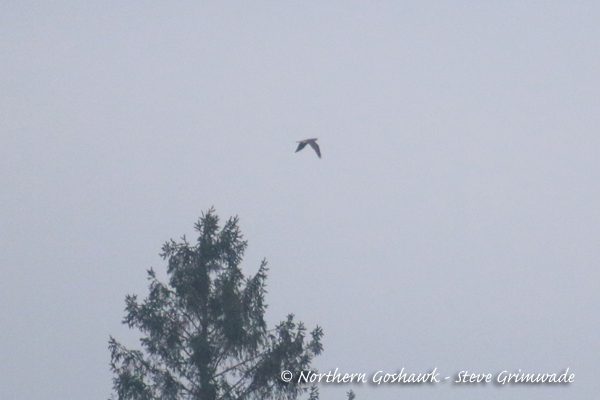 The day started dry and bright as we made our way northwards through ‘The Brecks’ and after a coffee and breakfast stop we arrived at a site in the northern part of the National Park which is good for raptors.

We were greeted by several COMMON BUZZARDS soaring over the woodland plus COMMON KESTREL and a brief RED KITE. After dark clouds passed over, some blue sky showed and our first NORTHERN GOSHAWK displayed distantly. Then it or another bird was spotted again but rather distant.

We didn’t have to wait long before an adult male flew over the nearby fields scattering all the COMMON WOODPIGEONS, luckily it flew into a pine tree and a few seconds later, a 2nd calendar male flew past too!

We scoped the adult for quite some time as he surveyed his territory before we left him in peace. A male BRAMBLING was spotted along the road whilst in the fields were several pairs of EURASIAN CURLEW.

Moving onwards we pulled up and immediately saw a singing male WOODLARK overhead which gave some good views before dropping down in a small field.

Our next port of call was Santon Downham where we spent time exploring the riverbank habitats. A pair of MANDARIN DUCK flew past and we found a pair of EURASIAN NUTHATCH building a nest in a nearby tree.

It was then back for a later than planned lunch before visiting Lynford Arboretum. Walking down to the bridge we could see it had been baited with food by other birders and we had good sightings of MARSH TIT, EURASIAN SISKIN, EURASIAN NUTHATCH and COAL TITS.

At the paddocks we immediately latched onto three HAWFINCH perched in Hornbeams before they flew into a nearby Ash tree and then dropped down to drink from the stream. A few minutes later, another bird flew over in the same direction before disappearing.

Moving further on, we spotted another bird perched on top of a distant pine tree and it could be seen singing from its lofty perch.

By now rain had started to fall so we retraced our steps to the carpark noting a large flock of REDWING plus a EURASIAN TREECREEPER.

The weather had turned for the worst so we popped into a sight that is often good for EURASIAN STONE-CURLEW and a few minutes later we watched a single bird that sat low in the Heather out of the driving rain.

With some time spare, we visited Lackford Lakes where the highlights included COMMON REDSHANK, EURASIAN OYSTERCATCHER and a few COMMON GOLDENEYE which concluded a fantastic day.