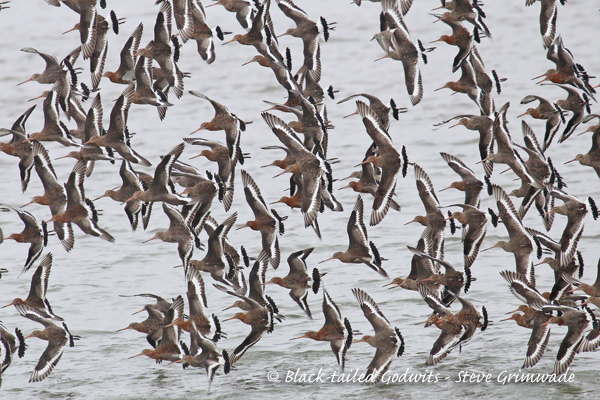 A chilly breeze blew down the River Colne as we all met for our four hour trip on Sailing Barge ‘Thistle’ from Brightlingsea but at least it was dry!

We headed northwards and soon we saw several groups of RED-BREASTED MERGANSERS either on the water or in flight plus quite a few DARK-BELLIED BRENT GEESE on the saltmarsh.

The bright weather encouraged a few WESTERN MARSH HARRIERS up and we all enjoyed watching a stunning male hunt along the sea wall.

After a brief interlude for coffee and biscuits, we motored gently towards Fingringhoe Wick EWT reserve where four PIED AVOCETS, our only ones of the day were seen.

Hundreds of BLACK-TAILED GODWITS fed voraciously on the mud at the mouth of Alresford Creek along with a few BAR-TAILED GODWITS which gave us the chance to compare these two similar species.

With a high tide forecast we turned around just south of Wivenhoe, the sails were hoisted and we drifted sedately along.

A brief spell of sunshine saw the local COMMON BUZZARDS take to the air and along the eastern side of the estuary, we must have recorded at least 15.

Lunch was served below deck and everyone appeared back on deck a short time later with smiles on their faces after some very tasty food!

Whilst most people were tucking into their food below, a female EURASIAN SPARROWHAWK terrorised the BLACK-TAILED GODWIT flock only a few feet from the boat.

Lots of summer-plumaged GREAT CRESTED GREBES bobbed on the open water and as we came into Brightlingsea, three SANDERLING and a COMMON RINGED PLOVER were seen on a small sandbank at the mouth of the creek.

Time had flown by as we said our goodbyes to the customers after yet another bird-filled Thames Barge Trip.