WHERE THE PAGER TAKES US – SPRING SPECIAL
Saturday 5th May 2018 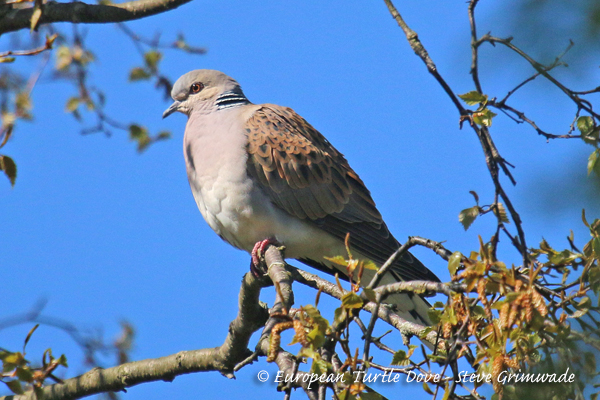 Our day started with a visit to Minsmere RSPB reserve on the Suffolk coast where we had good but distant views of a singing SAVI’S WARBLER at the back of Island Mere plus a brief sighting of a EUROPEAN OTTER too!

Nearby a pair of EURASIAN STONE-CURLEW were in an open field along with plenty of EUROPEAN RABBITS.

After a tip-off we headed to a site where we had fantastic views of EUROPEAN TURTLE DOVE singing in a Birch tree right in front of us.

After a coffee/breakfast stop in the café we wandered along North wall and down to the East scrape where lots of MEDITERRANEAN GULLS were nesting alongside BLACK-HEADED GULLS and on South scrape were COMMON, LITTLE and SANDWICH TERNS plus quite a few BLACK-LEGGED KITTIWAKES.

Over the trees we watched EURASIAN SPARROWHAWK and EURASIAN HOBBY hawking insects plus hundreds of SAND MARTINS.

We had a late lunch at Westleton Heath where EUROPEAN STONECHAT and EURASIAN HOBBY showed well before we spent the remainder of the day at the excellent Carlton Marshes SWT reserve.

Despite no sign of the long-staying American Bittern since early morning, the group had some good sightings of WESTERN MARSH HARRIERS, WILLOW WARBLER, CHINESE WATER DEER, BROWN HARE, WHIMBREL, COMMON BUZZARD, WESTERN YELLOW WAGTAIL and several singing COMMON CUCKOOS which rounded off a brilliant day in the field.