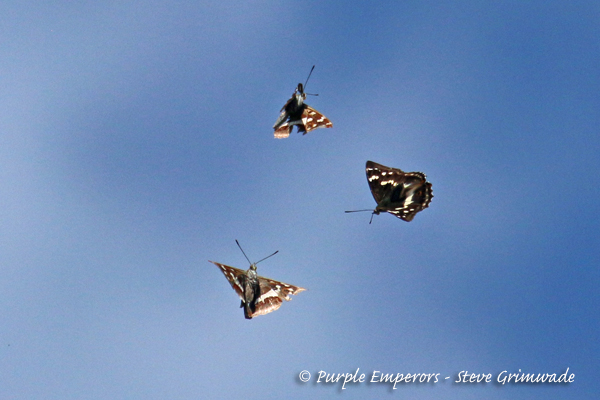 Our day started well with a WESTERN BARN OWL as we left Witham and made our way across for our final pickup in Welwyn Garden City. After a stop for a coffee etc, we made our way north to Fermyn Woods Country Park where we parked up and spent the morning wandering the forest rides.

The weather was pretty hot and plenty of butterflies were on the wing including RINGLET, LARGE SKIPPER, COMMA, LARGE and GREEN-VEINED WHITE.

Our first PURPLE EMPEROR was seen in flight as was a fine SILVER-WASHED FRITILLARY which flew past with a bright orange flash.

Reaching a large area of brambles we eventually located over 10 SILVER-WASHED FRITILLARIES nectaring and showing well for the whole group.

For the next couple of hours we explored the forest finding around 9 more PURPLE EMPERORS but they wouldn’t land due to the high temperatures!

Hot weather meant that dragonflies were on the wing with BROWN HAWKER, EMPEROR, FOUR-SPOTTED CHASER, BROAD-BODIED CHASER and COMMON DARTERS being noted.

On our way back we took another route and were rewarded with a rather tatty but nice BLACK HAIRSTREAK feeding on a thistle which gave good views.

PURPLE and WHITE-LETTER HAIRSTREAKS were seen with the former being rather common around oak and ash trees.

There were plenty of birds to be seen with RED KITES and COMMON BUZZARDS overhead, MARSH TIT, GOLDCREST, BULLFINCH, EURASIAN BLACKCAP, CHIFFCHAFF and YELLOWHAMMER being recorded.

We drove around to the visitor centre where lunch was enjoyed in the shade before heading back round to the main part of the wood. Another track was taken with more PURPLE EMPERORS seen and despite some rotten fruit and other unmentionables, they failed to come to the ground.

A couple of WHITE ADMIRALS gave a better show before we headed back to higher elevations.

Despite the searing conditions, we enjoyed a lovely day in the woods of Northamptonshire with a great enthusiastic bunch of customers!