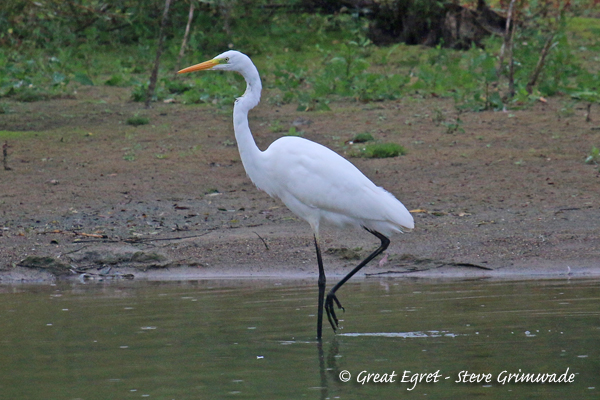 Our day kicked off just over the border in Hertfordshire with a visit to Therfield where a juvenile PALLID HARRIER had recently taken up residence. After a short walk we spent time overlooking rolling fields and in the distance was the PALLID HARRIER quartering over rough grassland.

Although views were not the best, the orange underparts and pale neck boa could be made out especially when the bird banked round. Several RED KITE, COMMON BUZZARD, COMMON KESTREL and a EURASIAN SPARROWHAWK were also seen.

The harrier disappeared from view so we concentrated on scanning the fields and were rewarded with eight GREY PARTRIDGE, YELLOWHAMMERS and parties of MEADOW PIPITS heading south.

Eventually the PALLID HARRIER returned to hunt the original field before perching up in trees bordering the fields. With light rain starting to fall, we wandered back to the van and headed off northwards to our next site.

Grafham Water was our next port of call and after parking up, we made our way to the reservoir edge where after a few minutes, we picked up a 1st winter RED PHALAROPE (GREY PHALAROPE) out on the open water. There was quite a bit of disturbance due to fishing and sailing boats so the bird was constantly on the move.

WESTERN YELLOW WAGTAILS, DUNLIN and both SAND MARTIN and BARN SWALLOWS were noted before the rain got a bit much. It was then round to the southern shore where most of the group had lunch in the shelter of the van.

A few hardy souls braved the rain and were rewarded with both ARCTIC & COMMON TERNS sitting side by side on a floating boom, whilst out on the main reservoir were two juvenile BLACK TERNS. The main highlight was a MANX SHEARWATER, blown in from the previous days strong winds. This oceanic seabird made several flights before resting again on the water.

With the weather not looking great, we headed back to Essex and Abberton Reservoir where we searched for a Ring-necked Duck, but to no avail. There was however, 4 GREAT EGRETS, GREEN SANDPIPER, BLACK TERNS and both RUFF and BLACK-TAILED GODWIT which concluded a super day despite poor weather!