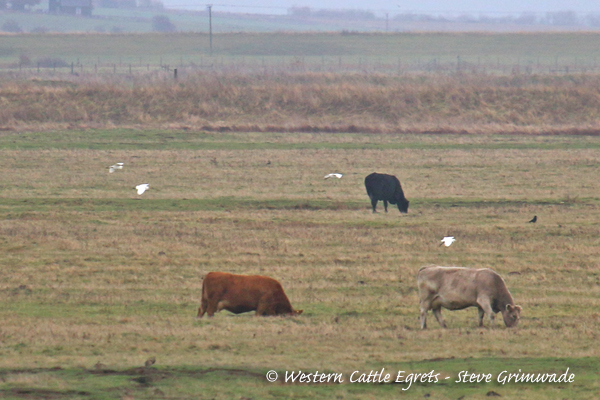 After heavy overnight rain we drove to Kent in bright sunshine with just a light breeze, which was good for birding as Sheppey isn’t the most sheltered of places!

We kicked off at Elmley National Nature Reserve and took ages to reach the carpark as there was so much to see. Lots of COMMON BUZZARDS and WESTERN MARSH HARRIERS quartered the fields with flocks of GREYLAG GEESE, NORTHERN LAPWING, EURASIAN CURLEW and COMMON STARLINGS.

On arrival, we strolled down to the first viewing screen, finding six WESTERN CATTLE EGRETS along the way, as they fed with cattle out on the marsh. A scan out over the reserve yielded more WESTERN MARSH HARRIERS and COMMON BUZZARDS plus a distant female MERLIN perched on a post. Out on the marsh was a first-year male MERLIN on a small post which flew off down the River Swale.

We then headed down to Leysdown on the east coast where the tide was out, but there were EURASIAN OYSTERCATCHERS, BLACK-HEADED GULLS and a few RUDDY TURNSTONE on groynes along the coast.

Moving further south, we checked out a wader roost on the beach which produced DUNLIN, RED KNOT, GREY PLOVER, SANDERLING and RUDDY TURNSTONE. It was superb to have lunch in the November sunshine, which was interrupted when a SHORT-EARED OWL flew over our heads! This sent us all running for our scopes and luckily we picked it up flying over the marsh where it was joined by a second bird. Although the bird was seen towards the sun, it was good for everyone to see it in the scope.

A female HEN HARRIER was spotted feeding along the edge of a game strip to the north and yet another MERLIN perched beside a COMMON KESTREL for good comparison. Two EUROPEAN STONECHAT perched on a fence as we moved round to Harty Ferry.

The last few hours of daylight were enjoyed at various viewpoints around the area and at the first we saw a first-year female EURASIAN SPARROWHAWK chasing COMMON STARLINGS without luck.

As we moved off, a cracking female HEN HARRIER flew over the fields beside the vehicle and we all had good views of it flying east alongside us.

At the raptor viewpoint, although breezy we spent a very enjoyable time with two more SHORT-EARED OWLS including one bird right next to the road, plus lots of WESTERN MARSH HARRIERS and COMMON BUZZARDS. Other birds of note included two WESTERN BARN OWLS, EUROPEAN STONECHAT, FIELDFARE and another EURASIAN SPARROWHAWK.

We arrived back in the Essex to find heavy rain falling so we realised how lucky we had been bird and weatherwise with the raptors of Sheppey making such a memorable day!