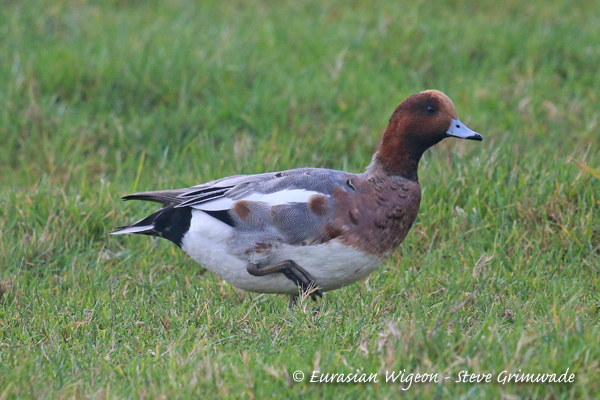 Our journey up to Frampton Marsh produced three RED KITES plus a couple of COMMON BUZZARDS and we arrived in the carpark as a rather heavy shower passed through.

Our morning session was spent wandering along the main track where in nearby fields, a female PEREGRINE FALCON perched on fence-posts and a scan through the goose flock yielded a small number of PINK-FOOTED GEESE plus three BARNACLE GEESE among the GREYLAG and CANADA GEESE. Over 100 FIELDFARES were present in the hedgerows and a flock of around 60 LINNETS flitted around the fields.

On the marshes thousands of EURASIAN WIGEONS and EUROPEAN GOLDEN PLOVERS enjoyed the wet conditions and were testament to the fantastic habitat management by the RSPB staff. Down on the sea wall we scanned the saltmarsh to find a couple of distant WESTERN MARSH HARRIERS but little else.

As we headed back for lunch we were treated to good views of a first year MERLIN that flushed all the wildfowl and waders before landing on fence-posts where superb scope views were enjoyed. As we were watching this smart bird, a SHORT-EARED OWL appeared in the background but soon disappeared behind reed-beds and despite a thorough search, we did not relocate it.

After lunch in the warm visitor centre, we headed round to the hides for the last couple of hours. PIED AVOCET, NORTHERN LAPWINGS, COMMON REDSHANK, DUNLIN, BLACK-TAILED GODWITS and COMMON SNIPE were present on the wader front but there was no sign of the long-staying Long-billed Dowitcher.

As the light dropped, another PEREGRINE FALCON flew over before attempting to hunt the masses of birds and two MERLINS were seen in flight over the saltmarsh.

As we tucked into a cuppa and delicious homemade chocolate cake (thanks Ann!) we were treated to a murmuration of around 1000 COMMON STARLINGS which rounded off a great day.