WHERE THE PAGER TAKES US - WINTER SPECIAL
Saturday 5th January 2019 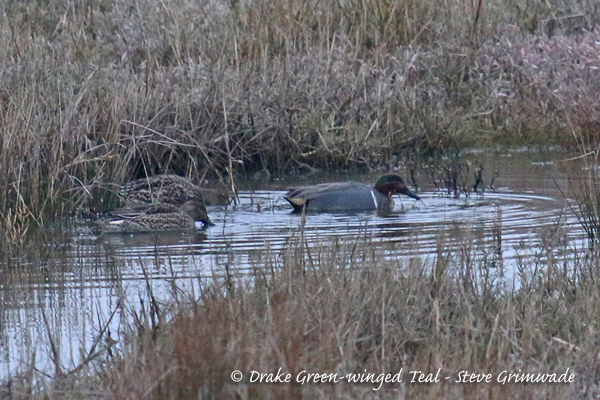 Despite grey and murky conditions, we had an excellent day in Suffolk where we caught up with a rather tatty-looking ROSY STARLING followed by 4 smart SHORELARKS and a few RED-THROATED DIVERS passing by offshore.

Moving northwards we found around 50 GREATER WHITE-FRONTED GEESE amongst some BARNACLES before stopping off in Leiston where 9 TUNDRA SWANS were in a flooded field.

After lunch, we trudged up the shingle at Dunwich and were rewarded with fab views of a drake GREEN-WINGED TEAL with 2 GREAT EGRETS nearby and a flock of around 80 COMMON SCOTER offshore.

A sortie was made to try and connect with a couple of Western Cattle Egrets up at Benacre but unfortunately there was no sign.

With the light fading fast, we popped back down to Leiston where the TUNDRA SWAN flock had increased to 11 and there were the two TUNDRA BEAN GEESE that we failed to see on our earlier visit.

As there was some time left, we headed to Island Mere Hide at Minsmere RSPB Reserve where a ringtail HEN HARRIER performed well and we had brief sightings of an EUROPEAN OTTER which concluded a fab day!