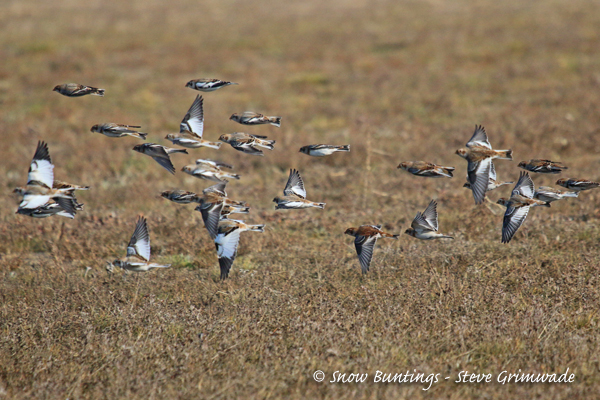 As we headed up through West Suffolk into Norfolk we experienced icy roads and snow so it was a great relief to reach the North Norfolk coast!

Holkham NNR was our first port of call where we saw a RED KITE hunting over the marsh and brief views of a GREAT EGRET before heading straight out to the beach to be greeted by a flock of 40 SNOW BUNTINGS showing really well in the sunshine. A quick look at the sea produced up to 1000 COMMON SCOTER and at least nine VELVET SCOTER flew west. A single RAZORBILL flew west and small numbers of SANDERLING were spotted.

Some dogs running around on the saltmarsh flushed two GREY PARTRIDGE and a JACK SNIPE which dropped straight back down again. A small party of passerines looked interesting and on closer inspection turned out to be 10 HORNED LARK (SHORELARK) which again gave great views.

With the approach of a heavy snow shower, we retreated to the area around the visitor centre to check the geese. A smart adult Black Brant was one of the first birds we saw, but on closer inspection it turned out to be one of the Dark-bellied Brent x Black Brant hybrids that occur with the Dark-bellied Brent Goose flock. We also had brief views of a PALE-BELLIED BRENT GOOSE in the flock and on the opposite side of the track were a few PINK-FOOTED GEESE and EGYPTIAN GEESE.

We then drove along the coast to Thornham Harbour and eventually caught up with 13 TWITE giving great views as they fed on the saltmarsh and a WESTERN BARN OWL hunted over fields.

The day concluded at Titchwell RSPB reserve where a female BRAMBLING was spotted on the feeders. Jane spotted a WATER RAIL in the ditch and we had brilliant views of this normally scarce bird. WESTERN MARSH HARRIERS quartered the reed-beds as we walked north to the sea and strong NW winds made conditions uncomfortable, but a ringtail HEN HARRIER provided some compensation.

Back in the shelter of the Parrinder hide, we found COMMON SNIPE plus two WATER PIPITS on islands. With time getting on we headed back to the carpark where another WESTERN BARN OWL hunted in the fields to the south. After cake and flapjack we began our journey home and saw another WESTERN BARN OWL near to King’s Lynn. Despite challenging weather conditions, an excellent day was had with quality bird sightings.