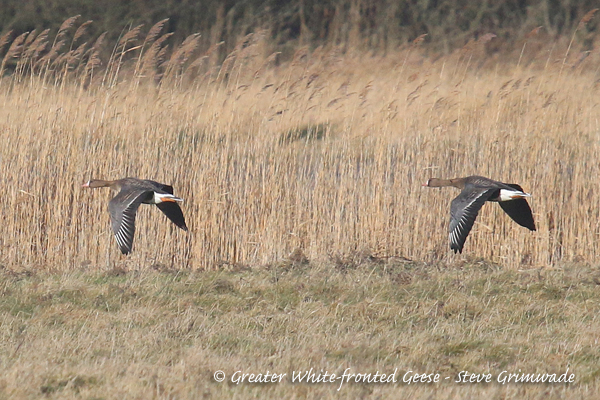 As Storm Erik passed through the UK, it brought very strong winds but at least it remained dry for our day in Suffolk.

After a brief stop for coffee and a snack, we made our first birding stop at North Warren RSPB reserve where a WESTERN MARSH HARRIER was mobbed by an immature PEREGRINE FALCON and then two lovely GREATER WHITE FRONTED GEESE flew into the grazing marsh in front of us. After several minutes they flew off and another small group flew past with a larger flock of GREYLAG GEESE. A EURASIAN BITTERN was seen distantly in flight but dropped down before everyone could get on it.

Thorpeness Meare was our next site where a small group of around 12 COMMON MERGANSER (GOOSANDER) were on the choppy waters plus EURASIAN TEAL, EURASIAN WIGEON, NORTHERN SHOVELER and a pair of EGYPTIAN GEESE.

With the wind still blowing strong, we visited Leiston where a small herd of TUNDRA (BEWICK’S) SWANS had taken up winter residence, and a few minutes later there were 13 feeding happily in a field.

Sizewell Beach was next where we hoped to get shelter from the wind below the Power Station and although it was better, it still wasn’t great. Hundreds of gulls fed over the warm water outflow where we picked up a 1st winter BLACK-LEGGED KITTIWAKE and a short while later, a superb 1st year ICELAND GULL! We watched the Gull for several minutes before it disappeared, never to be seen again.