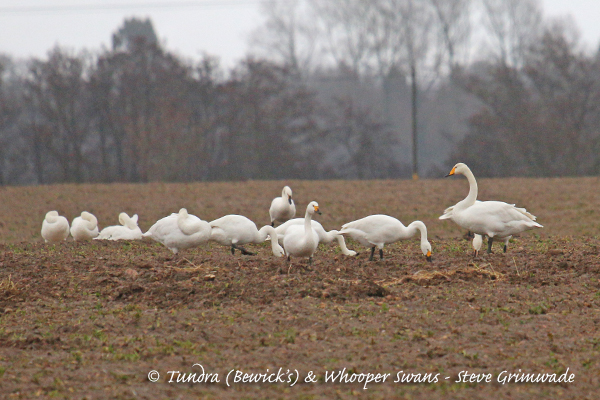 Luckily the wind had abated overnight but was replaced by persistent rain almost throughout the day! We popped into Alton Water on our way north to find a smart drake MANDARIN DUCK and the recently present RED-THROATED DIVER which was on the bank and didn’t look too well.

The drive northwards produced several COMMON BUZZARDS and after reaching Lowestoft we headed round to Oulton Broad, but it was rather quiet except for a displaying pair of EGYPTIAN GEESE and several LITTLE GREBES.

We parked near Lake Lothing and picked up a male PEREGRINE FALCON perched on a nearby building as it sheltered from the rain. After a warming coffee we headed over to Ness Point which was bird-less and we got pretty wet for nothing!

With the forecast not set to improve, we drove towards the Norfolk Broads taking several minor roads and struck gold when three COMMON CRANES flew in front of us, landing in a maize field some distance away. We set up scopes and watched a juvenile and two adults walk slowly across a field until they disappeared from view. With our main target under our belts, we tried our luck with wild swans and a short drive later came across a mixed flock of around 40 TUNDRA SWANS (BEWICK’S) and 50 WHOOPER SWANS in a field close to the road where we had brilliant views.

It was then off to the coast where we had lunch but apart from a few PINK-FOOTED GEESE it was rather quiet. With this in mind, we dropped down to Great Yarmouth and took a walk along the seafront where we found 54 MEDITERRANEAN GULLS in varying degrees of plumage including several ringed birds.

By now the rain had almost stopped and the sky was brightening so we chanced our luck in Lowestoft where we quickly found two PURPLE SANDPIPERS with a flock of RUDDY TURNSTONE which were really good to see. The male PEREGRINE FALCON was perched out in full view as we tucked into coffee and cake and soon afterwards made our way home after a wet but successful day.