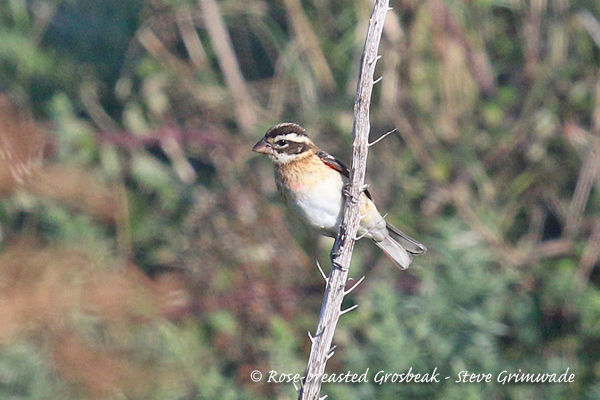 Our annual tour to the Isles of Scilly started with a weather advisory warning so we transferred to the Scillonian III for the sea crossing from Penzance to St Mary’s and although a little choppy it did produce COMMON EIDER, GREAT NORTHERN DIVER, RAZORBILL, ARCTIC SKUA, MANX SHEARWATER, BLACK-LEGGED KITTIWAKE, COMMON GUILLEMOT and a flyover WESTERN OSPREY!

Once on the islands we spent the next couple of days exploring St Mary’s where a SPOTTED CRAKE showed down to just two feet away! YELLOW-BROWED WARBLERS called from the sallows on the Garrison and we finally caught up with the BLUE ROCK THRUSH after a spot of cat and mouse.

Other species included EUROPEAN TURTLE DOVE, REDWING and migrants such as NORTHERN WHEATEAR.

The following day was spent on St Martin’s where a Rose-breasted Grosbeak had been seen and the day proved to be quite frustrating as we missed the bird by just five seconds after it was flushed by a tractor! There was some compensation with a LITTLE BUNTING and WHITE-RUMPED SANDPIPER feeding amongst the seaweed on a sheltered beach.

We kicked off the next day having superb views of a RED-EYED VIREO on St Mary’s as it flitted around Elms just metres away and in the next field was a RED-BACKED SHRIKE catching bees and other insects. Another transatlantic visitor was a young drake BLUE-WINGED TEAL consorting with EURASIAN TEAL on Porthellick Pools. Late afternoon the weather turned for the worse and we attempted to see a Yellow-billed Cuckoo. Just as we were about to give up, the YELLOW-BILLED CUCKOO perched up in front of us briefly before flying off into the gloom!

Midweek, the weather brightened and the wind dropped so there was only one option, head to St Martins for another crack at the Rose-breasted Grosbeak. Whilst doing this, two of the group enjoyed a day on Tresco where RED SQUIRRELS were seen whilst visiting the world-famous Abbey Gardens.

Back on St Martins we had brief but superb views of the ROSE-BREASTED GROSBEAK as it perched up on full view before flying off so we returned to St Mary’s (noting COMMON REDSTART at the quay). The afternoon was spent watching EURASIAN SPOONBILL, MERLIN, MEDITERRANEAN GULL and prolonged views of the BLUE ROCK THRUSH.

Our time on Scilly had flown by but we remembered those great birds, amazing scenery and fabulous food all spent with a wonderful group of customers. Can’t wait until 2020!