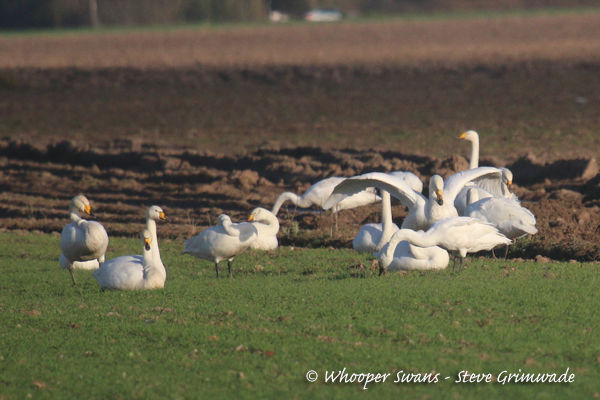 A very blustery day spent in the wild expanse of South Suffolk and the Norfolk Broads. Kicked off the day at Ness Point, Lowestoft where seven PURPLE SANDPIPERS roosted on the rocks before we headed into Norfolk.

Eight COMMON CRANES were seen in cut Maize fields and although it was difficult to keep the scopes steady we had good views. The rest of the day was spent visiting several different sites around the area where SLAVONIAN GREBE bobbed around a very choppy broad with EURASIAN NUTHATCH and EURASIAN SISKINS in the Alders. Lunch was enjoyed in the sunshine with MARSH TITS and a tame PINK-FOOTED GOOSE for company before we moved on.

A large herd of WHOOPER SWANS with a few TUNDRA (BEWICK’S) SWANS thrown in for good measure showed well and included a darvic-ringed TUNDRA SWAN with the code BVA on.

We concluded the day with a fabulous sunset over the Norfolk Broads after a very good day in the field!