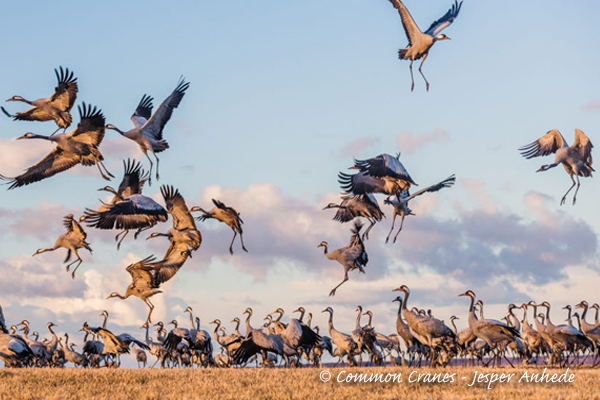 Hornborgasjön (Lake Hornborga) situated in the Swedish county of Västergötland is one of Sweden’s largest lakes and every spring, Common Cranes return from their wintering grounds in France and Iberia to Hornborgasjön, which is then suddenly transformed from a deserted winter landscape to a bustling birding site.

Our tour coincides with the arrival of up to 25,000 Common Cranes which will be a sight never to be forgotten!

Other species we hope to see on this tour include Black Grouse, Spotted Nutcracker, Rough-legged Buzzard, Western Capercaillie, Parrot Crossbill, Black Woodpecker and both Golden and White-tailed Eagles.

Day 1
We take an early morning flight from London Stansted to Gothenburg and make the two hour journey northeast to Lake Hornborga in Västergötland where we hope to get our first sightings of the vast flocks of Common Cranes before heading to our accommodation for the weekend.

Our base is a converted water mill that was built in 1881 and is now a great base for exploring the wetlands around Lake Hornborgasjön. It is also renowned for great home cooking using locally sourced organic ingredients
Overnight: Härlunda

Days 2 – 4
The following days will be spent exploring Lake Hornborgasjön and its environs where from late March to mid-April, tens of thousands of Common Cranes stop to feed up as they make their way to more northerly breeding grounds.

Numbers vary yearly and our tour is timed to witness the peak counts of these majestic birds as in early April 2019, 27,300 birds were counted! During our tour we will head out at dawn to see the birds coming into the feeding areas where the sight and sound is one of the highlights of the birding world. This RAMSAR site has been restored as one of the largest single nature conservation projects ever carried out in Sweden. The main goal of the project was to restore the wetland conditions for birds and a monitoring programme was established to survey the changes in fauna and flora.

Other species frequenting the lake during the winter are Whooper Swan plus Greater White-fronted, Greylag and Taiga Bean Geese, the latter species can be seen in large numbers. Amongst the common wildfowl on the lake, we will keep our eyes peeled for species such as Garganey which will be looking really smart in their breeding plumage.

Red-necked, Black-necked and Horned Grebes can be found amongst the common Great Crested and Little Grebes and the lake is host to Sweden’s largest Black-headed Gull colony which start congregating in early Spring.

Over-wintering raptors such as Golden Eagle, White-tailed Eagle, Rough-legged Buzzard and Northern Goshawk occur around the lake and on fine spring days, the latter species is often seen displaying over the vast pine forests.

The area around Lake Hornborgasjön is well appointed with visitor centres which feature several cafés where a hot drink and cake will go down well if it is a little chilly!

We will make a visit to the massive undisturbed conifer woods and bogs where species such as Eurasian Pygmy Owl, Boreal Owl, Western Capercaillie, Parrot Crossbill, Eurasian Black Grouse, Black Woodpecker and Nutcrackers can be seen.
Overnight: Härlunda

Birds
Expect between 70 and 110 species