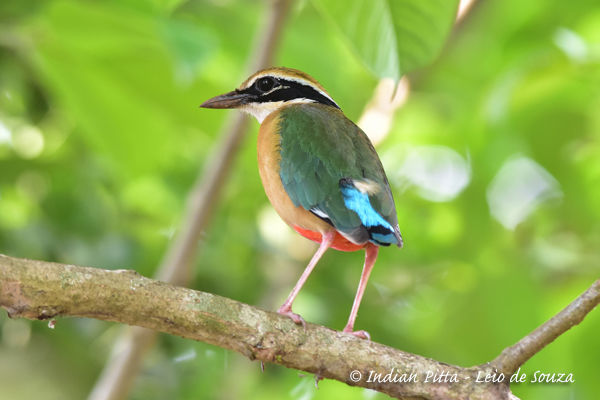 This former Portuguese enclave midway along the west coast of peninsular India is an excellent introduction to Asian birding and a popular winter birding destination. In a mosaic of habitats, from the mangroves and wetlands of the coastal plain to dense tropical forests, all within close proximity and easily accessible, Goa hosts over 450 species, including many peninsular endemics, complemented by a considerable diversity of butterflies and a small selection of mammals.

Our three-centre tour explores all of Goa’s varied habitats in search of a wide diversity of species and places particular emphasis on finding all those endemic to the Western Ghats, the range of low mountains running parallel to the coast. We begin in the coastal resort of Arpora, a convenient base from which to explore various habitats in the northern coastal plains and further into Goa’s central rocky plateau.

Our tour is a thorough exploration of Goa, from the coast into the foothill forests of the Western Ghats, just an hour’s drive away. This is an excellent yet relaxed introduction to Asian birding, offering a good overview of southern India’s peninsular species, with the chance of 18 out of a total 30 species endemic or near endemic to the Western Ghats, one of the most ecologically rich regions of the world, and a selection of Palaearctic migrants in winter.

Days 1 - 6
We take a morning flight from London arriving late evening in Dabolim Airport, Goa.
After a good night’s rest we spend the next five days exploring the varied habitats present in the coastal region of northern Goa from our base at the resort of Arpora, making excursions further inland into the grasslands and scrub jungle of the central plateau.

The habitat diversity here is reflected in the variety of birds found in this region and we can expect a good selection during our stay, from waterfowl to woodland species, including our first regional endemics.

A boat ride along the Zuari River will take us into the mangroves of the Cumbarjua Canal, in search of the highly localised Collared Kingfisher, Stork-billed, Black-capped & Pied Kingfishers and Slaty-breasted Rail.
Overnight: Arpora


Days 7 - 10
We will experience a change in landscape and habitat as we drive inland into the foothills of the Western Ghats for a four-night stay. These hills mark Goa’s eastern border and are considered one of the most ecologically rich regions in the world, home to 30 restricted range endemics and near endemics. In the moist deciduous forest, interspersed with cane thickets, bamboo brakes and trickling streams we will look for up to 18 Western Ghats endemics available in Goa among further peninsular endemics and south Indian forest specialities.

We will no doubt encounter an impressive selection of butterflies in this region, with spectacular forest swallowtails and endemics that include Tamil Lacewing, Blue Oakleaf, Paris Peacock and delicate Malabar Tree Nymph, with Indian Sunbeam, Leaf Blue and Common Map along forest streams and the striking Southern Birdwing, the largest butterfly in the Indian region.
Overnight: Bondla


Days 11 - 14
A short drive south will take us to the coastal resort of Patnem in southern Goa, our base for exploring both Cotigao and Netravali Wildlife Sanctuaries during a four-night stay here.

Cotigao is noticeably drier than other forest reserves in Goa, and we will look in particular for endemics and forest species that favour these conditions, such as Malabar Woodshrike, White-bellied Woodpecker, Yellow-footed & Grey-fronted Green Pigeons, Green Imperial Pigeon, Common Emerald Dove, Forest Wagtail and Oriental Scops Owl.

At Netravali, one of Goa’s least-explored areas, the sanctuary road climbs through primary forest to the peaks of a series of rounded hills where we hope to encounter Rufous-babbler, Indian Scimitar Babbler, Speckled Piculet, Malabar Trogon and Indian Blue Robin. Both here and in the Bhagwan Mahaveer Wildlife Sanctuary we will also come across a small selection of mammals including Bonnet Macaque, Northern Plains Grey Langur, the Malabar subspecies of Indian Giant Squirrel, Indian Palm Civet and the ubiquitous Three-striped Palm Squirrel, with the chance of Gaur and Leopard at Cotigao.
Overnight: Patnem


Day 15
Depending on flight times we may have time for some morning birding at Cotigao before heading to the airport for our overnight flight back to the UK.